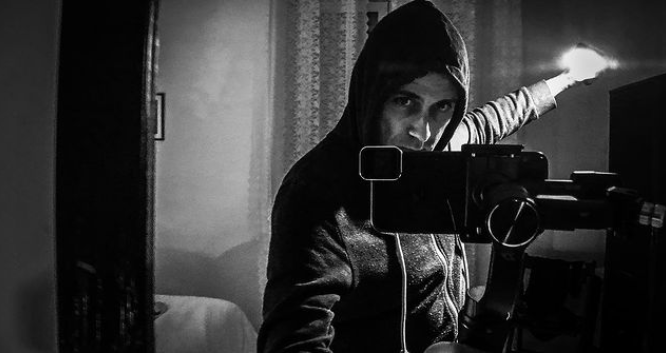 1) What drew you to the story and compelled you to make your film?

The short film OREB was created during the lockdown period in Italy between March and April 2020, when our country was one of the most affected by COVID-19 in Europe.

Everybody had to stay at home and was not allowed to go out. You could only go out for basic necessities, all the shops were closed, and those who went to work or went grocery shopping had to carry a work permit or a self-certification document. It was all surreal!

OREB tells the story of a social state and isolation due to quarantine by exploring the feeling of loneliness and alienation. Igor Petrotto, a stage actor in Italy, plays a street artist in the film. The screenplay was written by Fabio Appetito. When I told Fabio about the idea, he wrote a story that touched my heart, and we decided to try to make the film remotely without being on a remote set, working between two different cities, Palermo and Rome. The audio was mixed by Mara Notte (Notte Studios), who is originally from Los Angeles but lives here in Italy.

During the lockdown, with the actor Igor living in Rome and I in Palermo, the smartphone was the only means available. Plus, I am already familiar with FiLMiC Pro after using it for several years – I am a big fan of this app!

We did our production meetings via Skype. Igor installed the FiLMiC Pro app on his phone, and I taught him to use the settings. The funny thing is that Igor walked around the house with the camera during these video calls, and I had to decide from a distance the best locations and the right natural light for filming, to make sure that when we started shooting, Igor would be prepared to self-record successfully.

We had to order a low-cost tripod online and a microphone for him to record the voiceover. Mara had to teach the correct audio settings to the actor to record his voiceover, and then she remotely processed the audio for the final mix. We didn’t have any other choice, even if I own most of the accessories for filmmaking and cinemobile already at home, working during the quarantine we had to get creative!

It’s not my first experience with your app – I have already shot several Mobile works, one of which, THE MEETING, made with Clara Congera, was featured in the 2019 FiLMiC Fest competition in the Fiction category.

3) Please describe the experience of shooting your film with mobile devices and FiLMiC Pro.

My first mobile work dates back to 2010 when I shot a short film called LAST MINUTE (thriller). At the time, it was an experimental work, shot with a Nokia 5230 mobile at 50% and a Sony z7 at 50%. I have always been intrigued by unconventional means of shooting. At that time, I was not yet familiar with FiLMiC Pro, but I already saw the potential of mobile media.

I’m part of that generation of Filmmakers who experienced the transition between analogue and digital. My initial path was born as a freelance cameraman and video editor, then after a few years, I began to study directing. Over the years I’ve used many different video formats, from cine cameras to Super 8mm films to digital pro, but mobile has always intrigued me. When I discovered Filmic Pro several years ago I said WOW! – It was the app we needed! You can work manually, and today the app has been perfected even more. The level of quality has really grown for smartphones. I have been following FiLMiC Pro now for several years.

I’ve always thought that the most important thing as a Director is to tell a story by any means of shooting – Today you can do it with a simple piece of kit that fits in your pocket.

4) What did shooting on a smartphone allow you to do that you otherwise couldn’t?

The nice thing about the smartphone is that it’s pocket size, so you can use pocket-size accessories, and everything fits in a backpack. You can shoot in places and situations that would be uncomfortable for a professional camera.

A curious story, about two years ago I was in Los Angeles, a city that I feel connected to for several reasons, I found out that very close to the house where I was staying in West Hollywood was the house of Jim Morrison and all the places he frequented during the 1960s. I love the Doors! I had nothing with me to make an impromptu documentary, but luckily I did have an iPhone 5c mobile and the FiLMiC Pro app.

I asked a friend who knew some undisclosed stories of Jim Morrison to help me, and we walked around his local places and shot a small documentary, which I then edited back at home in Italy. It was fun, through this short documentary, I discovered things I never knew about Jim’s life. You can find it on my Vimeo and Youtube channels.

5) Where has your film screened to date (festivals, etc.)? Where can people see it next?

OREB screened in a number of film festivals in 2020, including the SF3 SmarphoneFlick Fest 2020 (Sydney, Australia), and in Italy at the Social World International Film Festival last October. OREB has won awards for Best Mobile and Best Web & New Media in two Hollywood festivals, Independent Short Awards and the IndieX Film Fest. OREB will screen next at the 2021 Dublin Smartphone Film Festival.

6) What is your next project? Where can people find you on the web?

I am currently working with Fabio Appetito on the screenplay of my first feature film. With Fabio, a good team between screenwriter and director has been created. The film will focus on the memories that each of us has, on the will to forget but also on the impossibility of not forgetting. Our goal is to make the film entirely with a smartphone, then we will look for a producer to help us support the project we hope!

I also recently made a mobile music video for Retro F, which is my AKA as Electronic Music Producer. The song is called “Summereyes,” which just won Best Music Video at the African Smartphone Film Festival. You can watch it on Retro F’s YouTube channel and my Vimeo channel.

Lastly, the new mobile Music Video from Retro F “90sVirus” will be released publicly on YouTube and Vimeo in an unusual format, shot with Filmic pro in 1: 1 4×5. Also from Retro F, coming in February/March 2021, the Mobile music video for “LOVE 2050.”

My website is sigfridogiammona.com where you can find the associated YouTube and Vimeo channels to view my work.