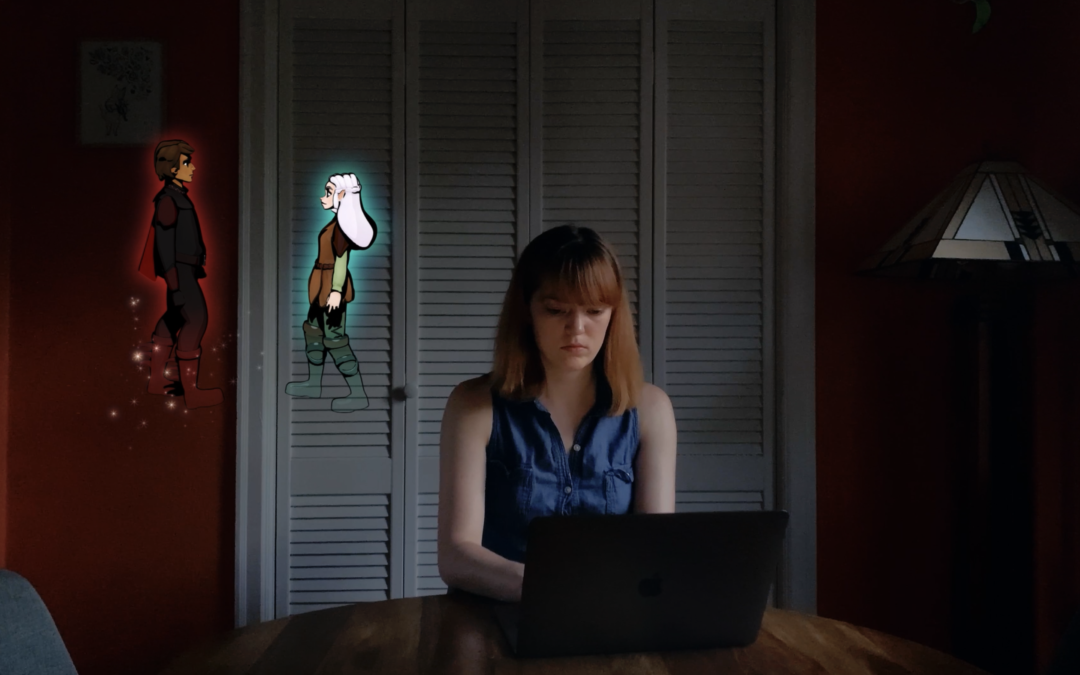 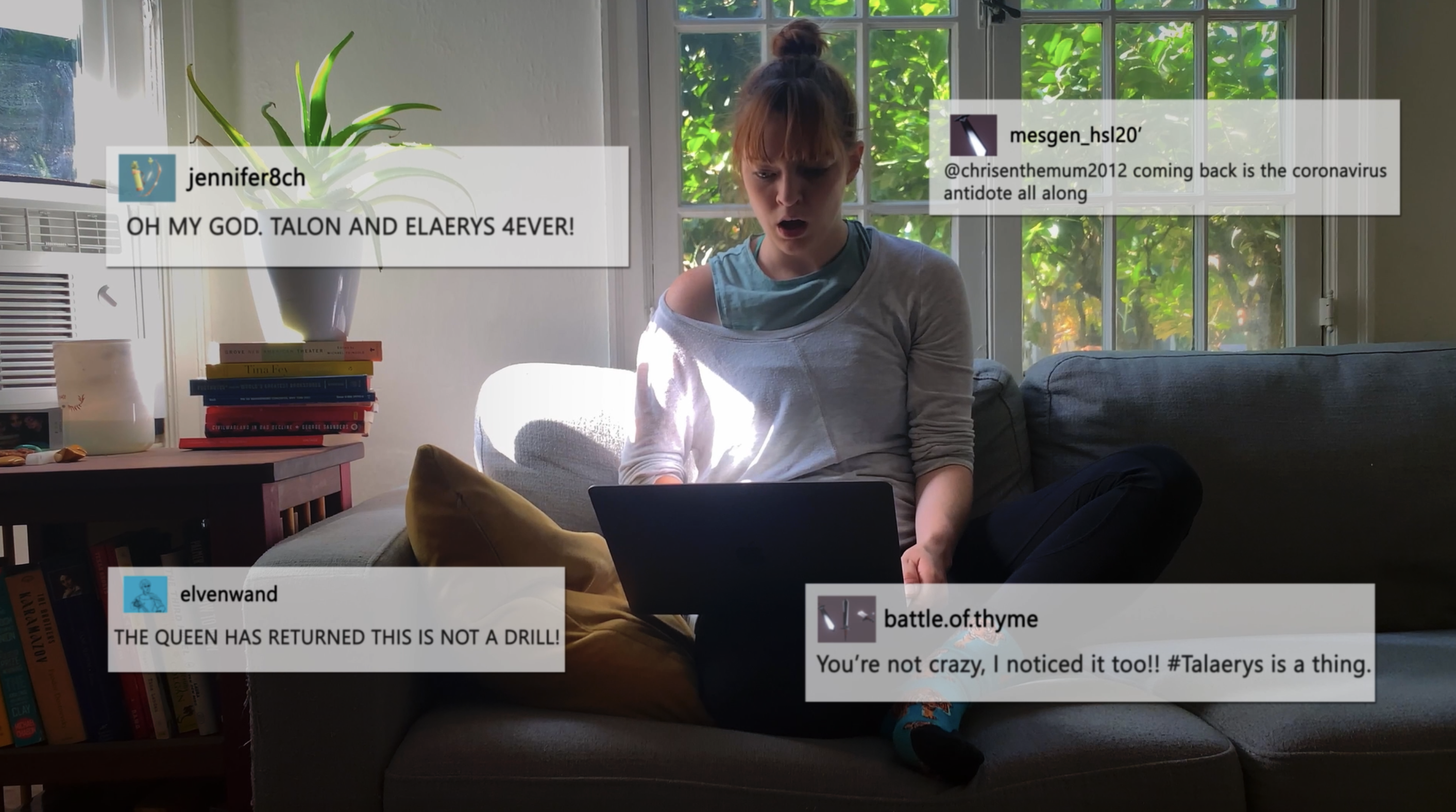 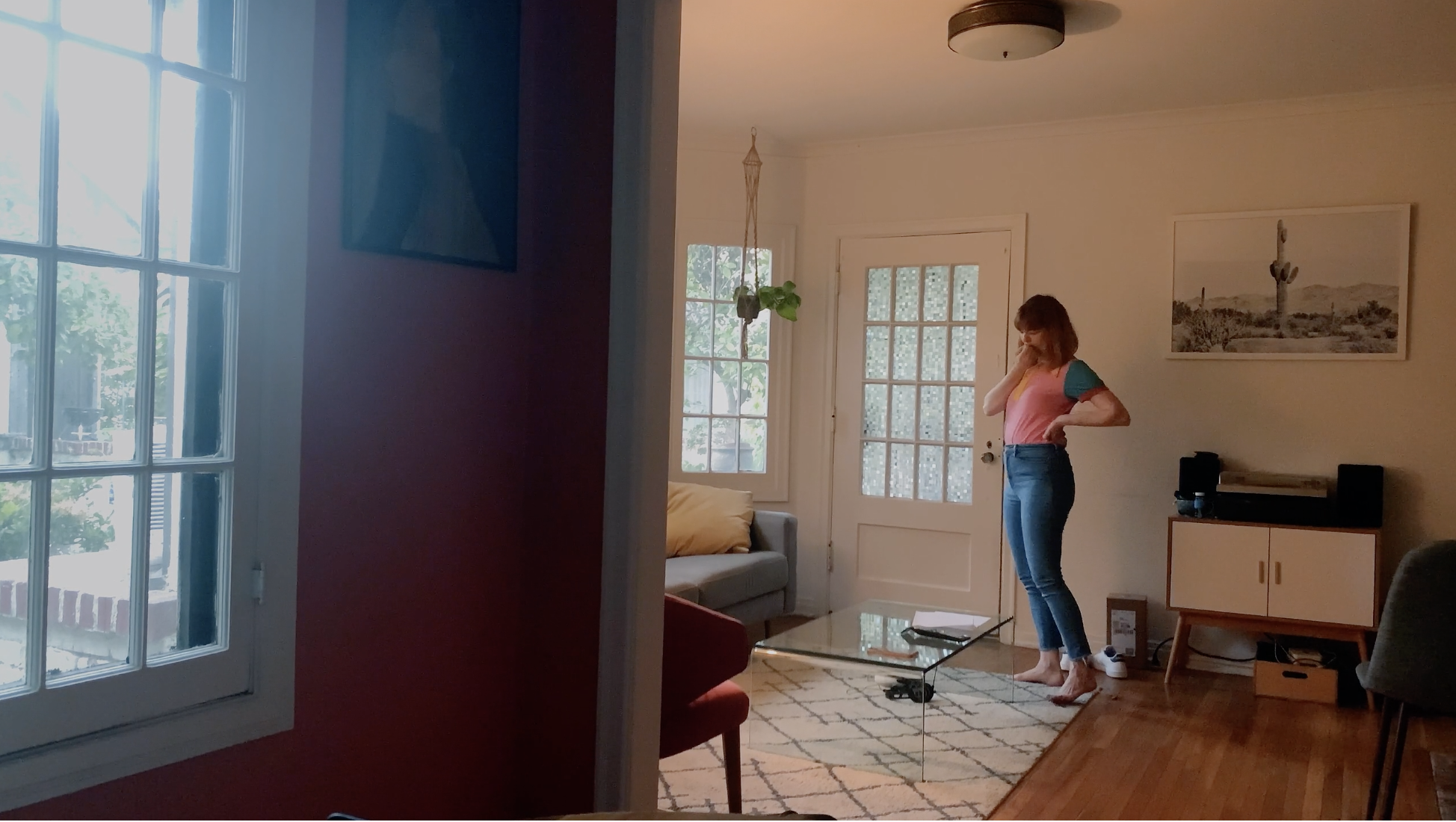 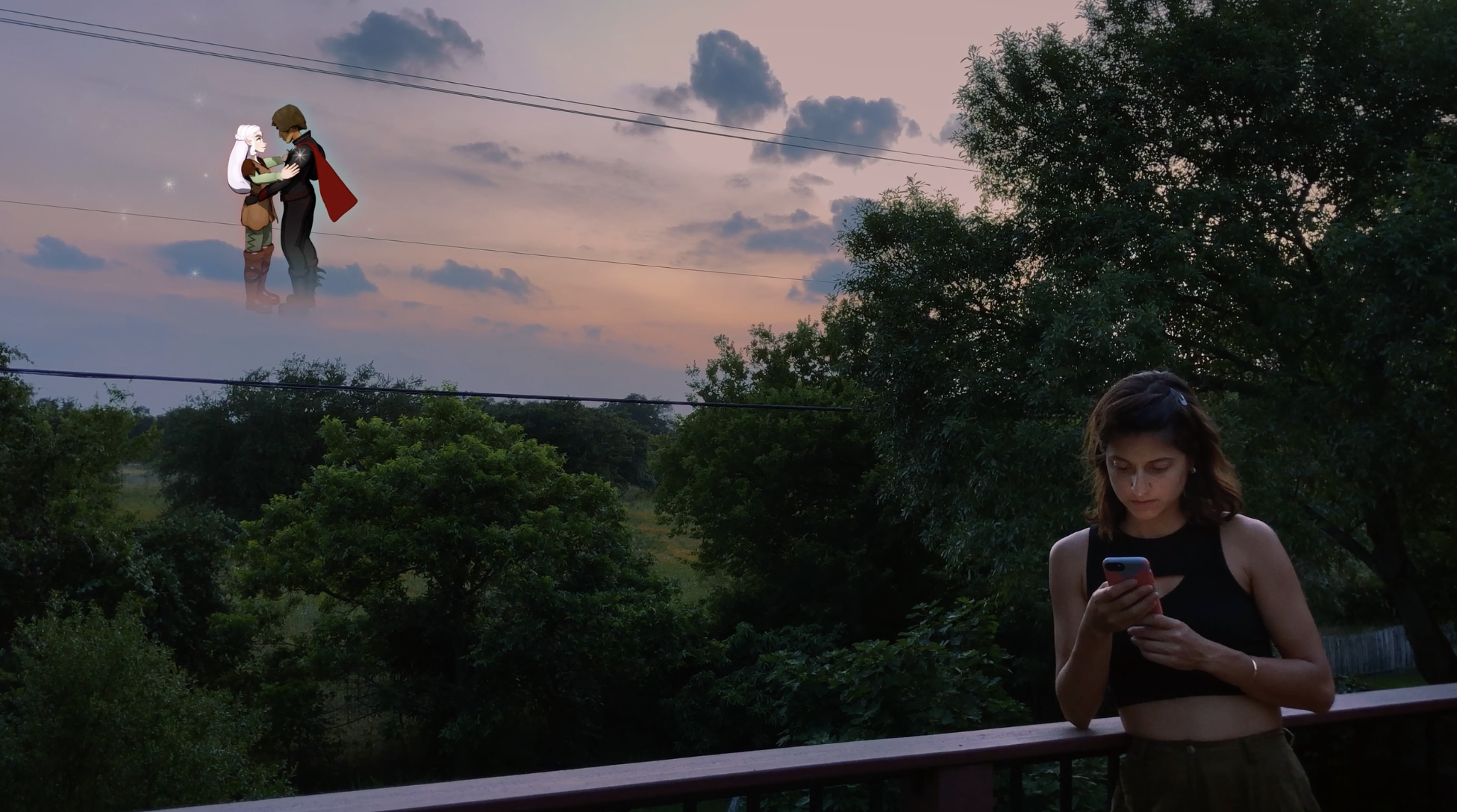 Katherine Bourne Taylor is a mobile filmmaker about to make a splash with her latest short film, Ships in the Night, when it hits the film festival circuit later this month. Ships in the Night is a live action short WITH animation, so this is a first for us here on the blog. Learn more about Katherine’s inspiration, process, and what she’s up to next in this exclusive interview!

1) What inspired you to make your film?

I’ve been a reader of fan fiction since I was a teenager, and I don’t see many stories based around this very specific, largely female corner of the internet. When quarantine began in March, I found myself diving more into old hobbies that didn’t hold much “value” other than bringing me joy and helping me to feel less scared. Among many things, 2020 has taught me the value of escapism as a means to stay sane in a scary world.

As someone who is drawn to what some might call “nerdy” interests, I was also yearning for a nerd-girl protagonist who experienced her nerd-dom not in a cute, ironic, male-gaze-centered way (as I’ve seen so many times before), but because of the true joy and sense of connection it brings her. This film represents the weird parts of myself that I have come to love, and it is my hope that the audience can feel less shame about whatever strange thing they are into that helps them cope in hard times.

Earlier in the year, I had met Jennifer Hoks (editor and co-producer of Ships in the Night) and we talked about Star Wars for over an hour, so I knew she “got” the fan-based world this film deals with. Her coming on board, along with The Banditry Animation Co., colorist Temesgen Gebremeskel, and sound engineer Zach Scheitlin in pre-production lit a fire under me so that I HAD to make the film with what was available to me, not just imagine it.

2) What prompted you to shoot your film with Filmic Pro on a smartphone instead of a traditional camera? Was this your first experience using our app?

An iPhone was all I had readily available, and I couldn’t exactly bring a DP with a traditional camera into my home (the film was shot in May of 2020). A first-time user, I downloaded Filmic Pro to see if it was a feasible option, and as I played around with it, I began to feel more confident at the idea of shooting this film myself on my iPhone. Filmic Pro takes the camera on the phone and elevates its capabilities. It is very user-friendly and intuitive for someone with a basic understanding of cameras and smartphones, like me.

3) Please describe the experience of shooting your film with mobile devices and Filmic Pro.

Being able to shoot a high-quality film with a smartphone is an example of how this app helps to lower the barriers to entry in the film world. While I have acted and produced my own work before, this was my first time wearing all the hats in production (directing, shooting, writing, and acting). Because there wasn’t anyone else behind the camera when I was ON screen acting, there was a lot of hopping back and forth I had to do. As a first-time filmmaker under these circumstances, Filmic Pro was absolutely the best choice for me, from framing the shots and being able to watch it back to easily uploading the footage.

4) What did shooting on a smartphone allow you to do that you otherwise might not have been able to?

The end of Ships in the Night features shots of people from all over the country who are separated but connected through a story, while animation (courtesy of The Banditry Animation Co. in Chicago) dances above their heads. It was absolutely the most ambitious part of the whole project. The app was instrumental in getting those shots because I could Venmo someone $15, have them download the app, let them know the settings to use, and get consistent footage from places I could not safely go to in person. Knowing that animation would be laid on top of all the footage as well, I directed them all toward the guide feature so the shots would not just look uniform, but there would be enough empty space around them for animation to be added later.

5) Where has your film screened to date (festivals, etc.)? Where can people watch it?

Ships In The Night will premiere at the Beloit International Film Festival (February 19-28). I’m excited to get eyes on the film and start our festival journey!

6) What is your next project? Where can people find you on the web?

I am currently experimenting with ways to expand the world of Ships In The Night into something larger, possibly a series or a feature. I’m also collaborating on a comedy-horror short to be filmed when it is safe, as well as writing a pilot with one of my best friends about a “millennial spiritual medium” who starts a business.

Check out my short on Omeleto: Cool for Five Seconds.

I’m based in Los Angeles, and if you’d like to collaborate, you can reach me via email: bournekath [at] gmail [dot] com. 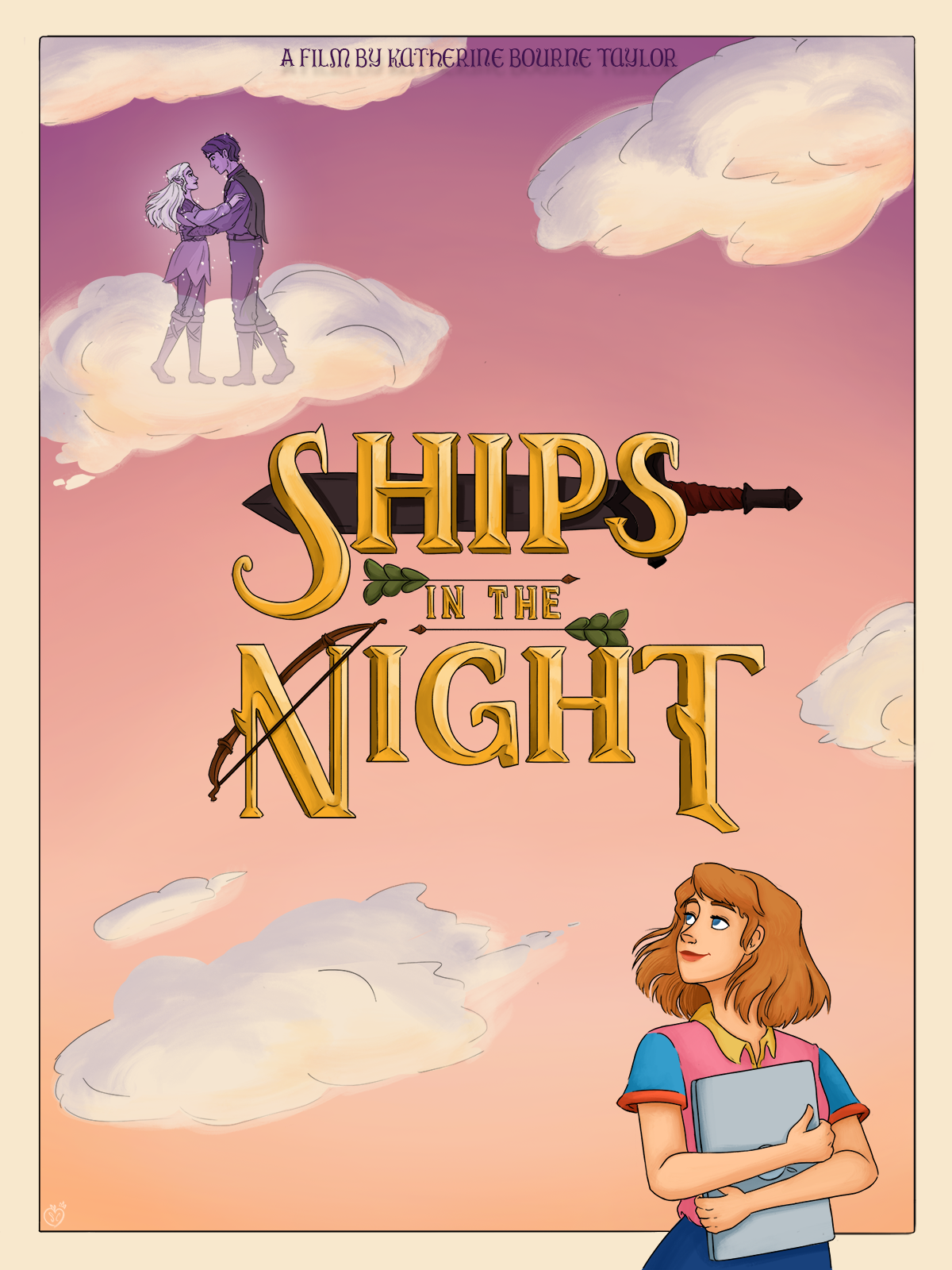